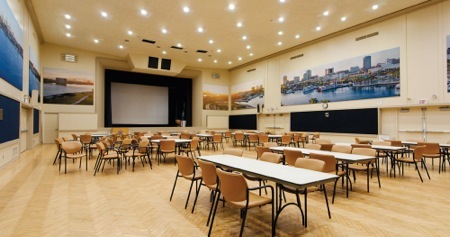 The Pantages Theater Gets A Makeover

The attention to the details really makes a difference in the finished project. This exceeded our expectations and is a continued source of inspiration for everyone.

Ernie was making a presentation to the staff in the Pantages Theater about guided images and mentioned to Yolanda, the Interior Designer, “that it would be nice to replace the soiled upper sound panels with a 360° panorama of Downtown Long Beach.” Yolanda thought that was a “Great idea!” and asked for an estimate.

Management had always planned on replacing the panels and decided to move the project forward because of the importance the theater played in the monthly Town Hall meetings. The budget was approved and included painting to complete the makeover.

A 360° panorama was shot from the top of a 100′ tall lighthouse in the Long Beach harbor and showed the Downtown skyline, Shoreline Village, Queen Mary, and the Port of Long Beach at three different times of the day. The sunset panorama was selected and printed onto fabric that measured 8 ft. tall with a total width of 186 ft.

The day after the panels were finished, there was a Veteran’s Day event for all the staff who are veterans unveiling the makeover. Everyone was amazed and pleased with the makeover, especially the mural.